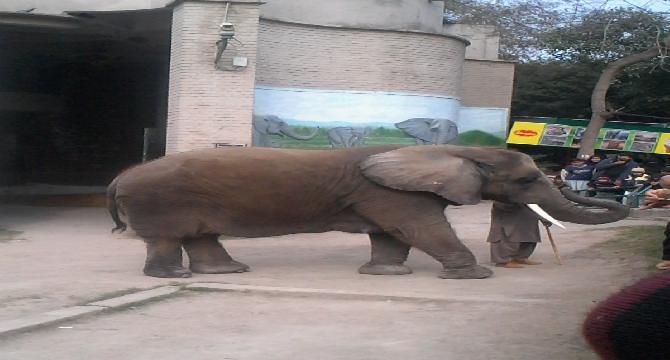 I took this picture during my recent visit to Lahore Zoo. There is nothing special in the photo but the actual thing that I want to share with you is the attitude of animals in Lahore zoo that I observed. This elephant has adopted to the conditions. The elephant is seems to be familiar with all the people and don't hesitate to collect food or money from them. Similarly most of other animals in Lahore zoo come near the fence when you try to give some food to them. Although these animals are not like pet animals but they have adopted themselves to the conditions.

In Aviary sections of the Zoo a big fence is built for different kinds of birds together. In general they don't fight with each other but some time the bigger one wants to show his dignity and chases the smaller birds and this is the nature.

Another thing that I observed that many animals are sponsored by some third party. The pair of lions called Raja and Rani is sponsored and kept by University of Punjab. Similarly some other animals are kept by different schools in Lahore. The administration of the Zoo should also take some initiative to improve the zoo.

It great. You are good at analyzing the things. Animals also manage to live as per the requirements of their environment.

I think big companies or university students should "adopt" a cage or animal and do their best to give wild animals all things necessary for their comfort. Proper research should go in their habitat and cleanliness.

The one thing common written at every fence in Zoo is "Don't give food to animals". This is for animals safety because as common people we don't know what a specific type of animal eats. People often love to give them food of different kinds like popcorn, snacks and chips etc that may be injurious for their health.