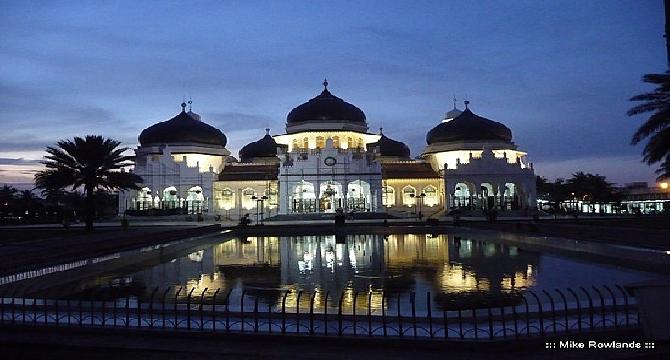 The Most Famous Mosque In Indonesiai

Baiturrahman Grand Mosque in Banda Aceh, a mosque which has its own history sheet, which is now the State Mosque located in the heart of the Aceh province. Name Baiturrahman Grand Mosque is derived from the name of the Great Mosque built by Sultan Iskandar Muda in the year 1022 AH / 1612 AD This highway is the first mosque built by the government of Sultan Iskandar Muda, but was burned down in the second Dutch military aggression in 1290 Shafar / April 1873 M, which in the event was killed Maj Khohler are then perpetuated a shooting at a small monument under the tree ketapan / Geulumpang near the north entrance of the mosque.
Four years after the mosque was burned Baiturrahman, in mid-Shafar 1294 H / March 1877 AD, by repeating the general promise Van Sweiten, then Governor-General Van Lansberge said it will rebuild the mosque Baiturrahman who had burned it. This statement was announced after deliberations held by the heads of State around Banda Aceh. Where disimpulakan that influence is very large mosque impression to the people of Aceh are 100% Muslim.

Nice Mosque in the world all of people should invite this beautiful mosque,, I think you will be happy to see it