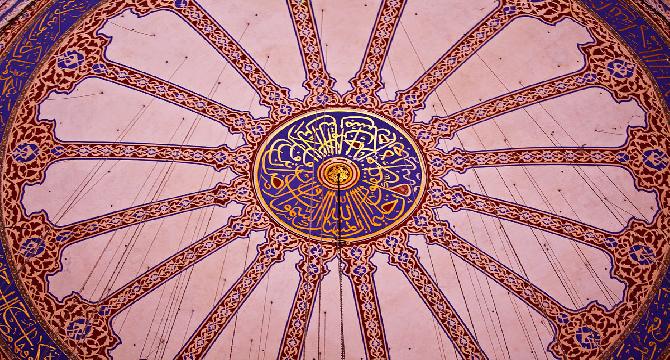 
The rise of Islam began with the Prophet Muhammad, who was born in about 570 in the city of Mecca, in central western Arabia. From about the age of forty until shortly before his death in 632 Muhammad received frequent revelations from Allah delivered through the angel Gabriel. These were written down into 114 chapters or suras and collected together a generation after the death of Muhammad. The revelations are collectively known as the Qur'an, the sacred book of Islam.
A second source of authority for Muslims is the Hadith (which literally means "statement") . The Hadith consists of a collection of sayings and deeds of the Prophet and his companions which were transmitted by a chain of authorities and written down between the ninth and eleventh centuries. (Individual sayings or traditions of the prophet and his companions are also known as hadith.) The example set by the Prophet as recorded in the Hadith is known as the Sunnah, a term that literally means "w ell-trodden path". The Sunnah provides the normative basis upon which Muslims conduct their lives.

The main sectarian division in Islam is between the Sunni and Shi'a traditions. Sunni and Shi'a share the same prophetic revelatory event described in the Qur'an and the Sunnah: they each accept as fundamental Allah's unity and the mission and mes sage of Muhammad. The division between the two traditions derives from the question of who is authorised to rule over the community of Muslims (Ummah). For the Sunni, authority to rule was originally in the hands of the community , which appointed a caliph (vice-regent/president) to rule on its behalf. They recognise the first four caliphs as Muhammad's legitimate successors.

The Shi'a, however, placed authority solely in the hands of the fourth caliph, Ali, who was also the Prophet's cousin and son-in-law, and his descendants. Shi'ism has developed its own system of law and theology; its own clergy; festivals and places of pilgrimage; and a special religious ethos characterised by a fervour to suffer for the cause.

In spite of the division between Sunni and Shi'a, Islam has avoided the extensive fractural divisions that have occurred in some other major world religions. There have of course been various splits, but many of these were the result of slightly variant approaches to jurisprudence and theology rather than actual sectarian divisions caused by doctrinal differences. The various jurisprudential and theological schools in Islam tend to be referred to with the Arabic word "Madhhab" (which means "a path that is walked along") since the term does not suggest any value judgements with regard to the style of Islam that is being practised. Muslims who affiliate themselves to different theological or jurisprudential madhhabs will worship in the same mosque. There is no sense of denominational difference here, and it is inappropriate to regard the different madhhabs as sects.

The terms sect or independent group can, however, be used to refer to those groups which, through developing doctrines and practices clearly at odds with Qur'anic teaching or the traditions of the Prophet, have placed themselves outside of main stream Islam. Four such major sects have emerged from within the Sunni tradition: Kharijiyyah, Mu'tazilah, Wahhabiyyah and Ahmadiyyah. Three have arisen from within Shi'a: Isma'iliyyah, Nusayriyyah and Qarmatiyyah. These are all regarded by orthodox Muslims as heretical. Other groups that have emerged from within the Shi'a tradition are the Druzes, the Babis and the Baha'is. Although these groups emerged from within the Shi'a branch of Islam they do not consider themselves to be Muslims but are independent traditions in their own right.