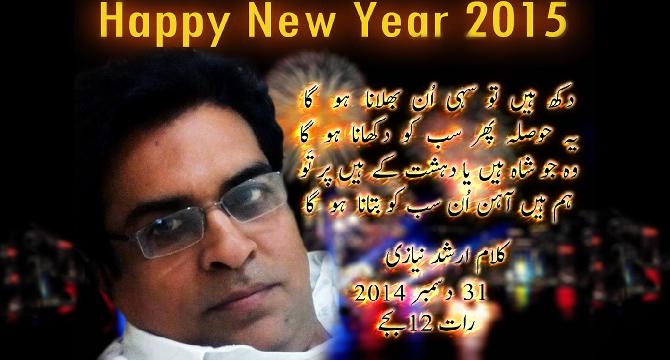 A day before yesterday the year of 2014 ended. The Sun of 31st December set in the west and left so many memories. Some sweet and some bitter. For us Pakistanis the year of 2014 proved as usual. We face all the problems as same as they were earlier. Load shading the lake of natural gas in homes and for industries, poverty, floods, and the most horrible issue of terrorism just kept chasing all us Pakistanis.
Now the New Year of 2015 has started. Two days are passed. Here now I can see the whole nation is now one against terrorism. Army operation is very successfully in progress against these coward terrorists.
On the other hand we are now in the age of media. So our politicians are not as free for corruption as they were in past. People of Pakistan now have enough political awareness due to long Marches and sitting of PTI and PAT in Islamabad the capital of Pakistan. Now there evidences that public is having courage to oppose wrong or irregularities.
Hoping for bright future of Pakistan in the New Year of 2015.

Image and poetry is my own composed in Photoshop.

I think, we Pakistani's don't deserve to say happy new year. It has been such an awful year for all of us. I mean the Peshawar incident, deaths in Tharpaker and then the political clashes. Its been a tough year. I hope 2015 proves to be good.

Jaffy my friend you are quite right but we have to live and have to get courage. We all just entered into 2015 with heavy heart. Allah bless you.